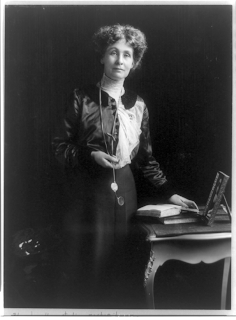 Born in Manchester, England on July 14, 1858, Emmeline Pankhurst was raised in a radical Liberal household. Her parents, Robert and Sophia Goulden, had 11 children together, and Emmeline was the first. She began accompanying her mother to women's suffrage meetings at the age of 14. Pankhurst was educated in Manchester in her early years and was later sent to France to study abroad. In 1879, she became engaged to Richard Pankhurst, who was 20 years older than she. Together they had five children, Christabel, Sylvia, Frank, Adela, and Harry. Her eldest son past away, followed by her husband, Richard Pankhurst, 1898, leaving Emmeline widowed with four children to care for. She worked part time at the "Registrar of Births and Deaths" until she fully committed herself to fighting in the battle for women's rights. In October of 1903, Emmeline Pankhurst founded the Women's Social and Political Union (the WSPU). Pankhurst passed away in 1928 after a strong career that lasted 40 years, the same year equal voting rights were granted to women.
Posted by Naomi B. at 9:22 PM No comments:

http://upload.wikimedia.org/wikipedia/commons/4/45/Emmeline_Pankhurst_adresses_crowd.jpg
Emmeline Pankhurst traveling through and acknowledging a large crowd of men and women.
Posted by Naomi B. at 9:21 PM No comments:

Emmeline Pankhurst's major belief was that women were equal to men. Therefore, women women have as much a right to vote and participate in government as men do. She believed that simply asking for progress was not enough, and that serious actions needed to be taken to achieve the awareness of the government. In 1903, the same year that Emmeline Pankhurst founded a group called the Women's Social and Political Union, the women’s suffrage movement turned militant. The movement for women's rights became violent and aggressive. They began to march on the streets, smash windows, destroy property, and established the policy of hunger strikes when arrested. 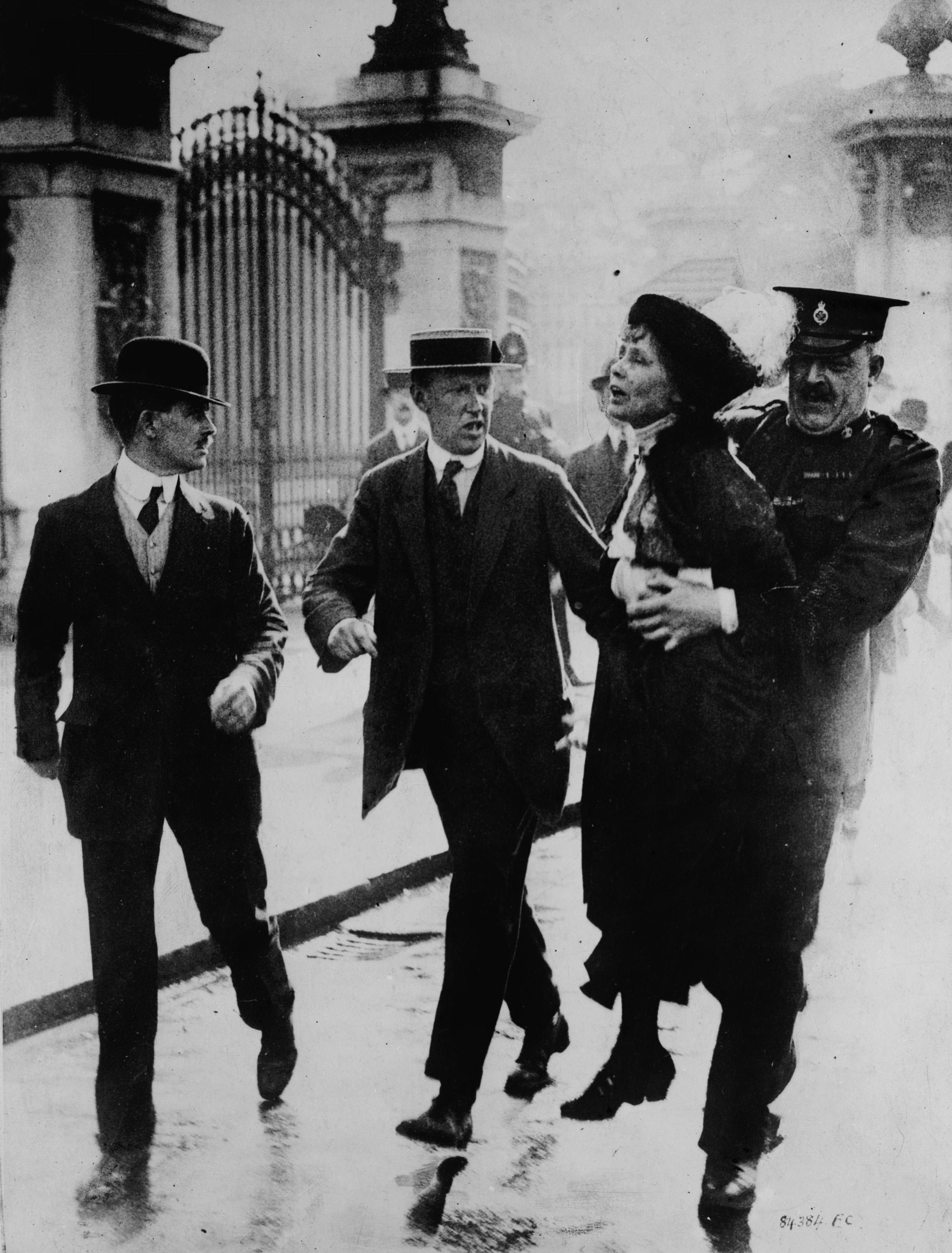 http://antoniopo.files.wordpress.com/2008/12/emmeline_pankhurst_arrested.jpg
Emmeline Pankurst being dragged off by authorities while protesting.
Posted by Naomi B. at 8:45 PM No comments:

Short Term Affects on the World

Pankhurst helped to create the beginning of a movement to use force in order to gain attention. Becoming militant proved a useful tactic to Emmeline Pankhurst and her followers, and they received more and more attention for their aggressive protestation. Pankhurst was one of the founders of a movement that showed women that they did not have to be silent, that they could make a scene and be "unladylike" for the cause of their freedom. Because of this, the protesting of the suffragettes paid off. In 1918, British women over 30 years old and who met a certain set of qualifications were granted the right to vote. However, Pankhurst and her suffragettes were not satisfied. They continued to object until in 1928, the year of Pankhurst's death, all woman in Britain, 21 years and older, could vote. These voting regulations were the same rules that were applied to men...Pankhurst had reached her goal. Against a government full of men, Pankhurst fought and inspired others to fight along side her. As a result, women's political power increased immediately.
Posted by Naomi B. at 8:41 PM No comments:

http://www.topfoto.co.uk/gallery/1908/images/prevs/hip0000123.jpg
Emmeline Pankhurst being arrested with dignity.
Posted by Naomi B. at 8:39 PM No comments:

Long Term Impact on the World

The movement that Emmeline Pankhurst helped to start was only the beginning. Through her efforts and the efforts of her fellow suffragettes, women of the world knew that they could protest and protest aggressively. They learned that they were not bound to the situation they were born in. In some ways, Emmeline Pankhurst made women realize that they were half of the population, and that their actions could impact the world just as much as those of men did. Emmeline Pankhurst inspired the generations of female activists following her to be strong and relentless until justice was granted. Pankhurst risked so much in order to insure that the progress she was making towards women's rights would never be reversed. She gave the women of Britain a voice that would never be taken away again.
Posted by Naomi B. at 8:38 PM 4 comments: